I love nonsense poems and songs; an appreciation I no doubt acquired from my Dad who introduced me to them early on. He never specifically said he loved them but he sure knew a lot of them and his eyes would light up when he recited them.

The first one I remember learning from him was Antagonist by Hughes Means (1899):

Yesterday upon the stair.
I met a man who was’t there.
He wasn’t there again today.
Oh

When I came home last night at three,
The man was waiting there for me
But when I looked around the hall,
I couldn’t see him there at all!
Go away, go away, don’t you come back any more!
Go away, go away, and please don’t slam the door…

Last night I saw upon the stair,
A little man who wasn’t there,
He wasn’t there again today
Oh, how I wish he’d go away…

I only remembered the first stanza but I’m certain Dad recited the whole poem when I was young. Which begs the question: where would my Dad have picked up an 1899 poem by Hughes Means? I strongly suspect it came from his Dad but I never thought to ask.

Then came these pearls, football cheers no doubt from Dad’s college days at Columbia University.

And the equally absurd:

I later discovered Lewis Carroll and that introduced me to a whole new dimension of nonsense and just plain surreal imagery. Two of my favorites were Jabberwocky: “Twas brillig in the slithy toves. Did gyre and gimble in the wabe….” and The Walrus and the Carpenter: 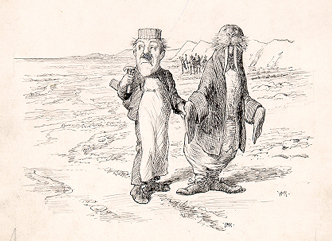 The time has come,” the Walrus said,
To talk of many things:
Of shoes–and ships–and sealing-wax–
Of cabbages–and kings–
And why the sea is boiling hot–
And whether pigs have wings.

When I was in my twenties I had a belt buckle with the walrus scene on it. Yes, I liked it that much. And at 60+ I still take great pleasure in being able to recite all twenty eight lines of Jabberwocky and have gotten endless hours of pleasure introducing kids to it. Best done with full dramatic inflection and gestures! There’s nothing worse than a poem read with that dreaded “recitation tone”.

For outside influences I can thank my summers at Camp T-Ledge, Orrs Island, Maine. One of my favorites, and most enduring, is the Billboard song by Homer & Jethro. I can’t remember who taught it to me but it might have been my cabinmate Jane Freeman. Apparently there are at least two versions of this song but this is the one I remember:

As I was walking down the street one dark and gloomy day
I came upon a billboard and much to my dismay
The sign was torn and tattered from the storm the night before
The wind and rain had done it’s work and this is what I saw:

Soooooo take your next vacation in a brand new Frigidaire
Learn to play the piano in your winter underwear
Doctors say that babies should smoke until they’re threeeeeeee
And people over 65 should bathe in Lipton Tea.
With flow through tea baaaaags.
[The last line was apparently improvised by us]